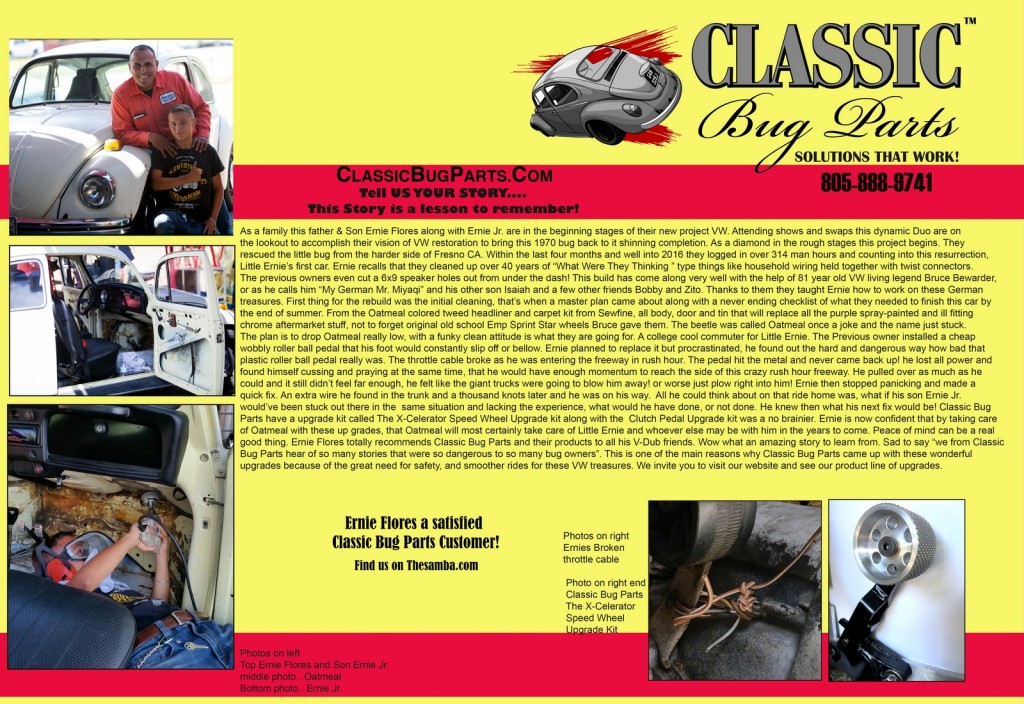 Father & son Ernie Flores and Ernie Jr. are in the beginning stages of their new project VW.  Attending shows and swaps, this dynamic duo are on the lookout to accomplish their vision of a VW restoration, bringing this 1970 bug back to shining condition.  This project began as a true diamond in the rough.  To start, they rescued the little bug from the harder side of Fresno CA. Within the last four months and well into 2016, they have logged in over 314 man hours and counting into this resurrection, which is Ernie Jr.’s first car. Dad recalls that they cleaned up over 40 years of “What were they thinking?” type things, like household wiring held together with twist connectors…  The previous owners even cut 6×9 speaker holes out from under the dash!

This build has come along very well with the help of 81 year old VW living legend Bruce Bewarder, or as Ernie calls him “My German Mr. Miyagi”.  Also helping out are his other son Isaiah and friends Bobby and Zito. Thanks to them, Ernie Jr. is learning how to work on these German treasures. First thing for the rebuild was the initial cleaning, and that’s when a master plan came about–along with a never ending checklist of what they needed in order to finish his car by the end of summer.

From the oatmeal-colored tweed headliner and carpet kit from Sewfine, to all the body and door parts that will replace the purple spray-painted and ill-fitting chrome aftermarket stuff, a serious transformation is underway.  And don’t forget the original old-school Empi Sprintstar wheels Bruce gave them! The beetle was called Oatmeal once as a joke, and the name just stuck. The plan is to drop Oatmeal really low–a funky clean attitude is what they are going for. A cool college commuter for Little Ernie.

The previous owner had installed a cheap and wobbly roller ball pedal and his foot would constantly slip off or below. Ernie planned to replace it but procrastinated, and then he found out the hard and dangerous way just how bad that plastic roller ball pedal really was. The throttle cable broke as he was entering the freeway in rush hour. The pedal hit the metal and never came back up! He lost all power and found himself cussing and praying at the same time, hoping that he would have enough momentum to reach the side of the crazy rush hour freeway.  He pulled over as much as he could, and it still didn’t feel far enough.  He felt like the giant trucks were going to blow him away! Or worse just plow right into him! Ernie then stopped panicking and made a quick fix. 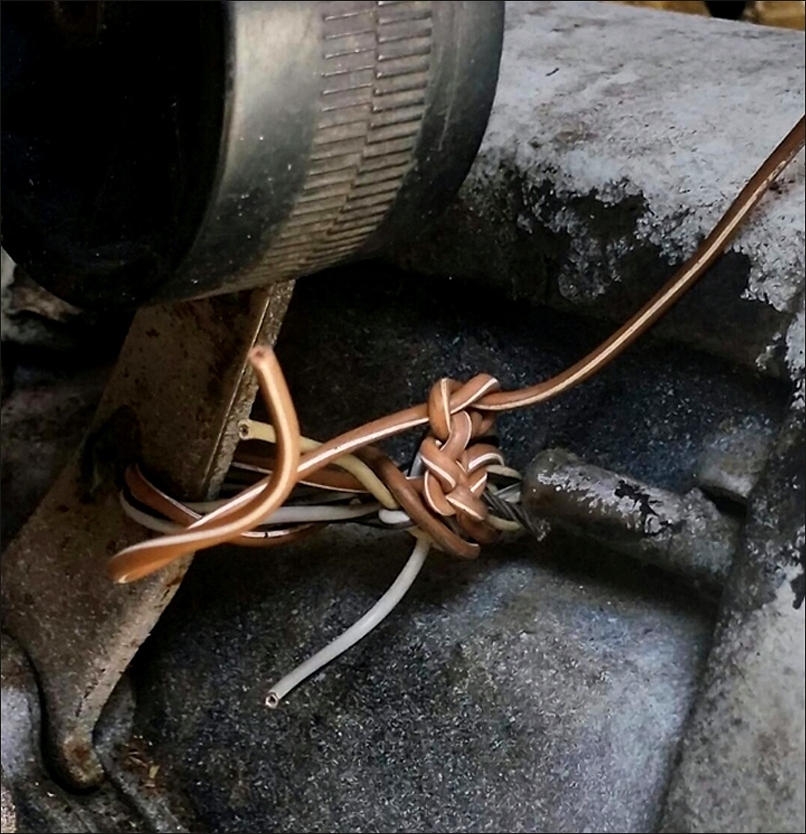 An extra wire he found in the trunk and a thousand knots later, and he was on his way. All he could think about on that ride home was, what if his son Ernie Jr.  would’ve been stuck out there in the same situation?  Lacking the experience, what would he have done, or not done? He knew then what his next fix would be!

ClassicBugParts has an upgrade kit called The X-Celerator Speed Wheel, and this, along with the Clutch Pedal Upgrade kit, was a no brainier. Ernie is now confident that by taking care of Oatmeal with these upgrades, it will most certainly take care of Little Ernie and whoever else may be with him in the years to come. Peace of mind is a really good thing. Ernie Flores totally recommends Classic Bug Parts and our products to all his V-Dub friends. (Thank you, Ernie!)

What an amazing story to learn from… Sad to say, those of us at Classic Bug Parts hear so many stories of similar dangers faced by bug owners. This is one of the main reasons why the designers at Classic Bug Parts came up with these wonderful upgrades, precisely because of the great need for safety and smoother rides in these VW treasures.

Ron, Jane, and the team at ClassicBugParts.com look forward to hearing about great successes from Ernie, Ernie Jr., and company! 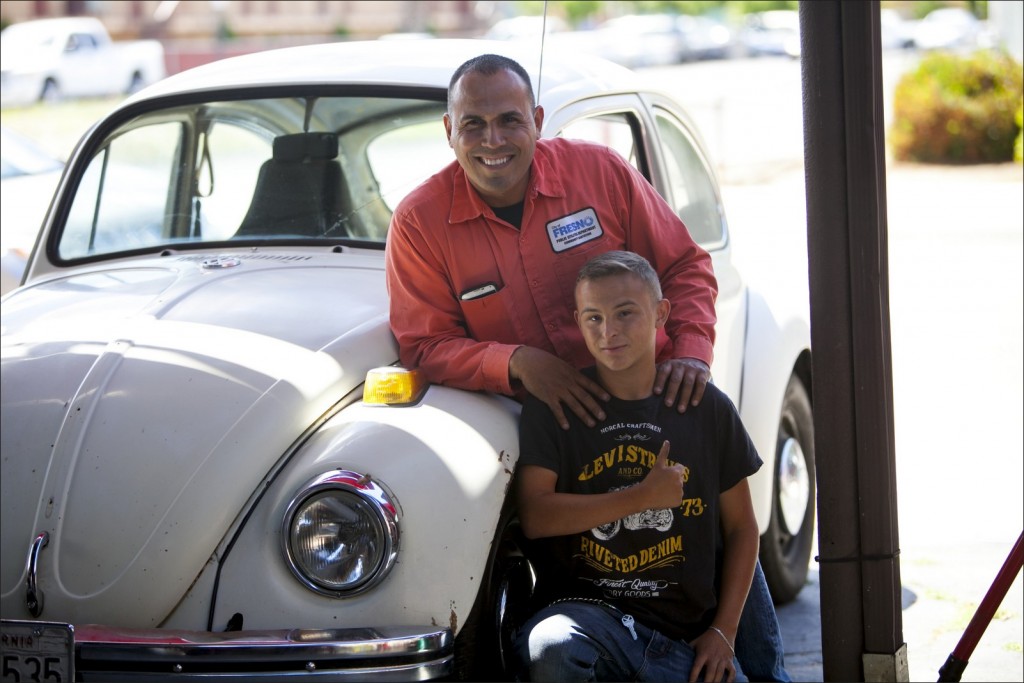 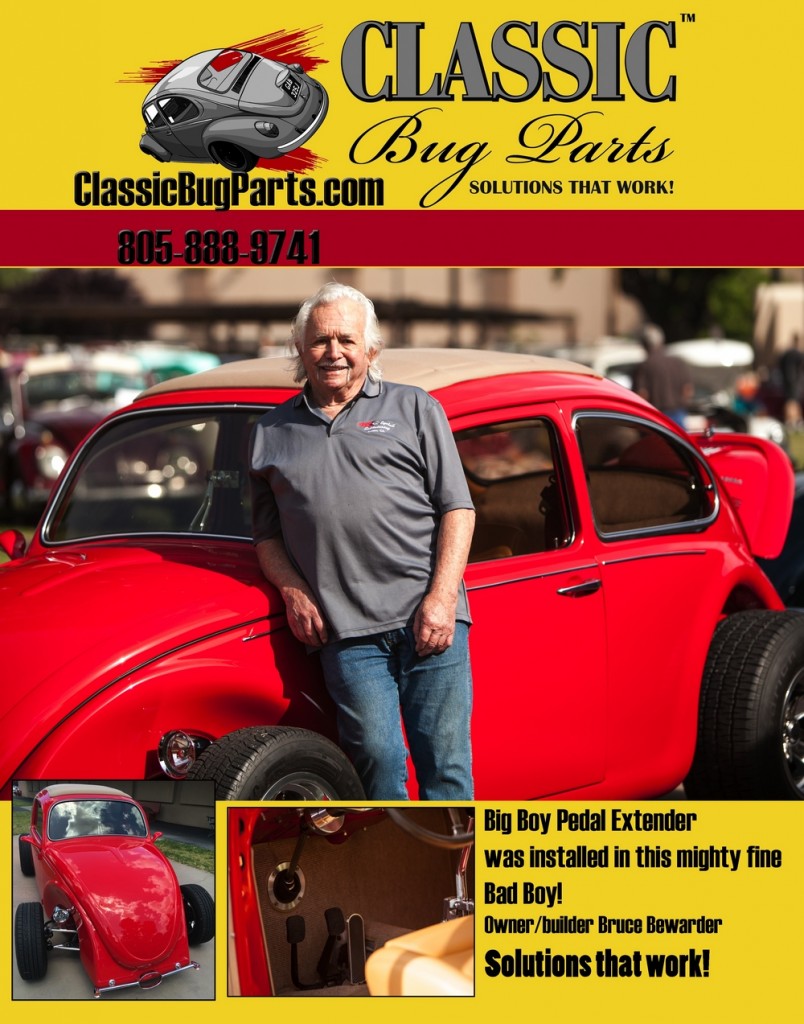 Note:  The picture of the pedals clearly shows the extra space your feet will enjoy with the Big Boy Pedal Extender upgrade… 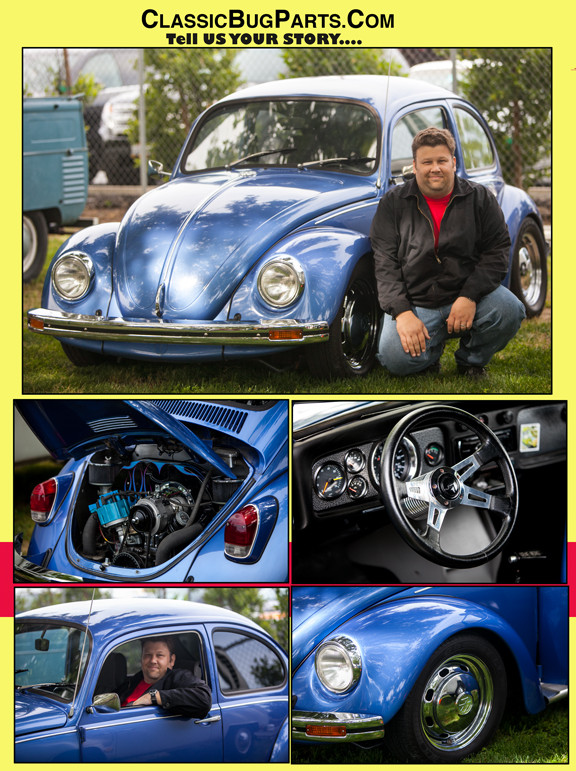 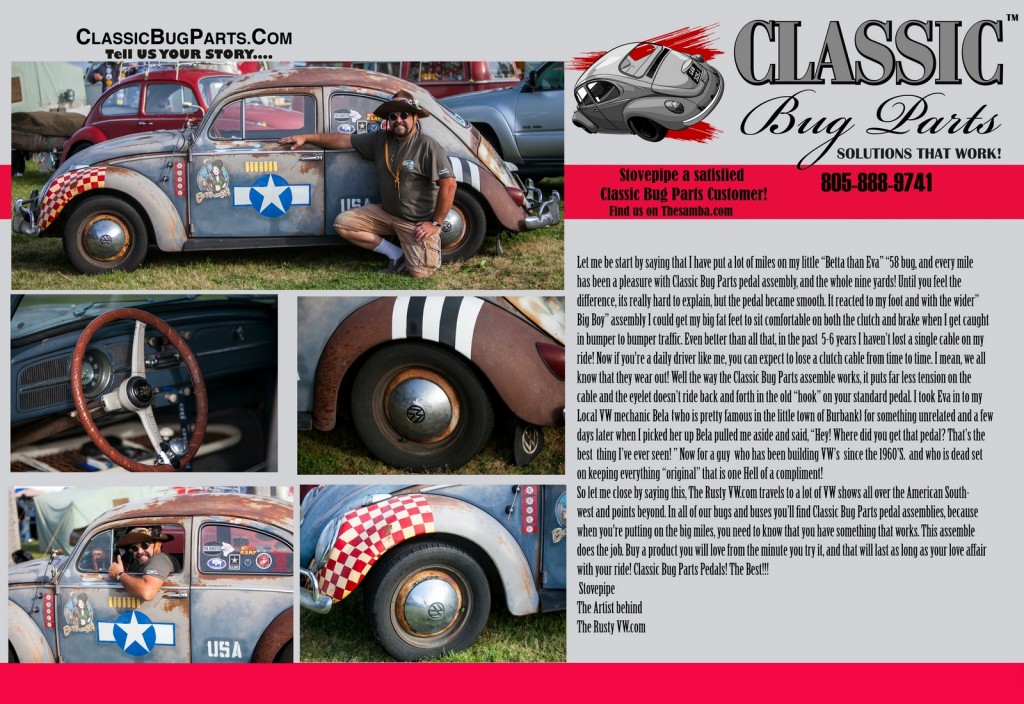 About 5 or 6 years ago, as I was getting my baby back in top running order, my buddy Larry walked over to the Classic Bug Parts booth at Rich Kimball’s Drag Day. “You really want to do something good for your bug? Buy one of Ron’s pedal assemblies!” So, after a brief conversation to make sure it would fit into my ’58, I bought the whole kit! New X-Celerator Pedal assembly and the “Big Boy” Clutch Pedal Extender, the whole nine yards!

Well, Larry and I got it all installed. Let me say right now, I’ve put a lot of miles on my little “Betta than Eva” ’58 bug, and every mile has been a pleasure with these pedals! Until you feel the difference, its really hard to explain, but the pedal became smooth. It reacted to my foot, and with the wider “Big Boy” Clutch Pedal kit I can now get my big fat feet to sit comfortably on both the clutch and brake when I get caught in bumper to bumper traffic. Even better than all that, in the past 5-6 years I haven’t lost a single cable on my ride! Now if you’re a daily driver like me, you can expect to lose a clutch cable from time to time.  I mean, we all know they wear out! Well, the way the Classic Bug Parts assembly works, it puts far less tension on the cable, and the eyelet doesn’t ride back and forth in the old “hook” on your standard pedal.

I took ol’ Eva in to my local VW mechanic Bela (who is pretty famous in the little town of Burbank) for something unrelated, and a few days later when I picked her up, Bela pulled me aside and said “Hey! Where’d you get that pedal? That’s the best thing I’ve ever seen!” Now for a guy who has been building VW’s since the 1960’s and who is dead set on keeping everything “original”, that is one Hell of a compliment!

So let me close by saying this, The Rusty VW.com travels to a lot of VW shows all over the American Southwest and points beyond.
In all of our bugs and buses you’ll find Classic Bug Parts pedal assemblies, because when you’re putting on the big miles, you need to know that you have something that works. This assembly does the job. I’m waiting anxiously for the brand new Bay Window Assembly that has been in the works for some time…because I’m tired of the door hinge holding mine together!

Buy a product that you’ll love from the minute you try it, and that will last as long as your love affair with your ride! Classic Bug Parts Pedals! The BEST!

See you down the road,

Stovepipe
The Artist behind
The Rusty VW.com 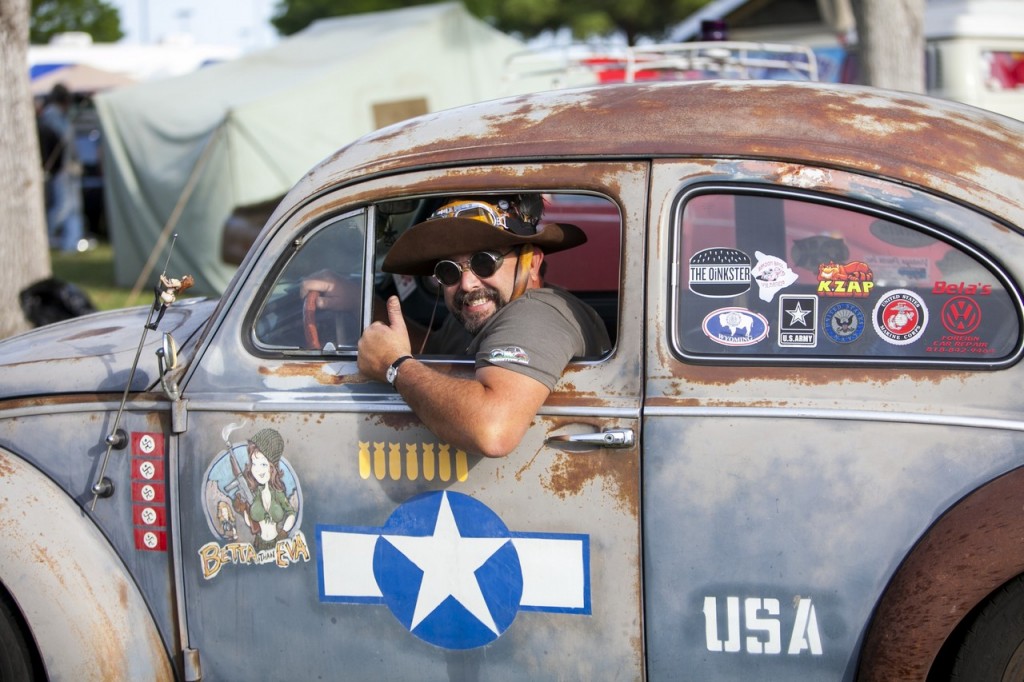 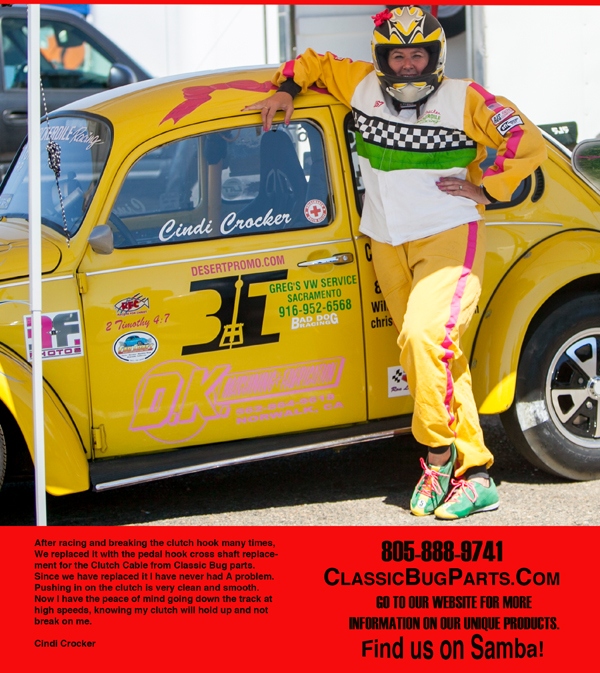 After racing and breaking the clutch hook many times, we replaced it with the pedal hook cross-shaft for the clutch cable from Classic Bug Parts.  Since we have replaced it I have never had a problem.  Pushing in on the clutch is very clean and smooth.

Now I have peace of mind going down the track at high speeds knowing my clutch will hold up and not break on me. 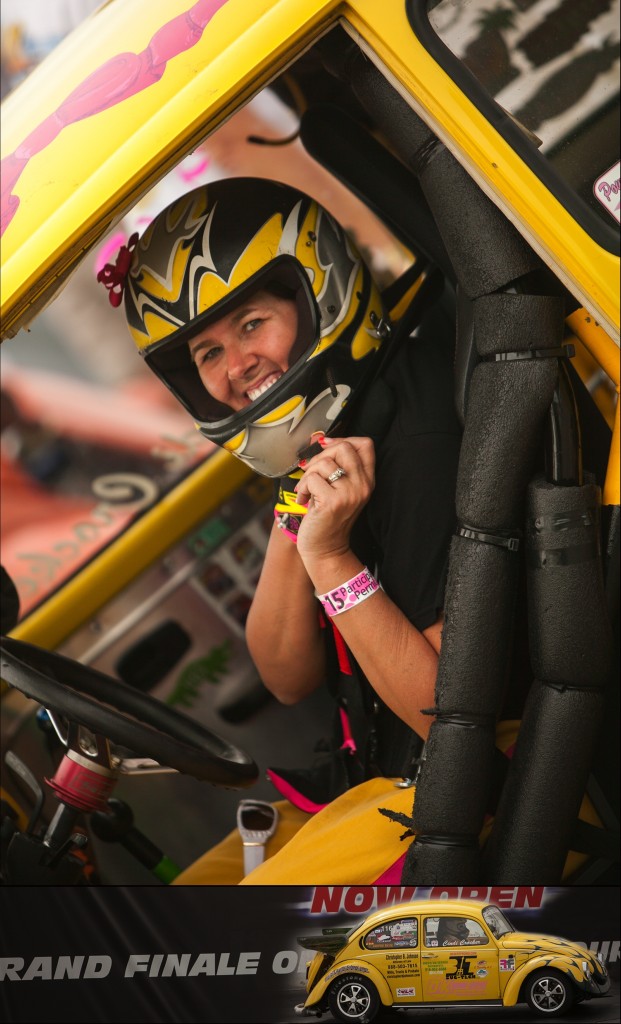 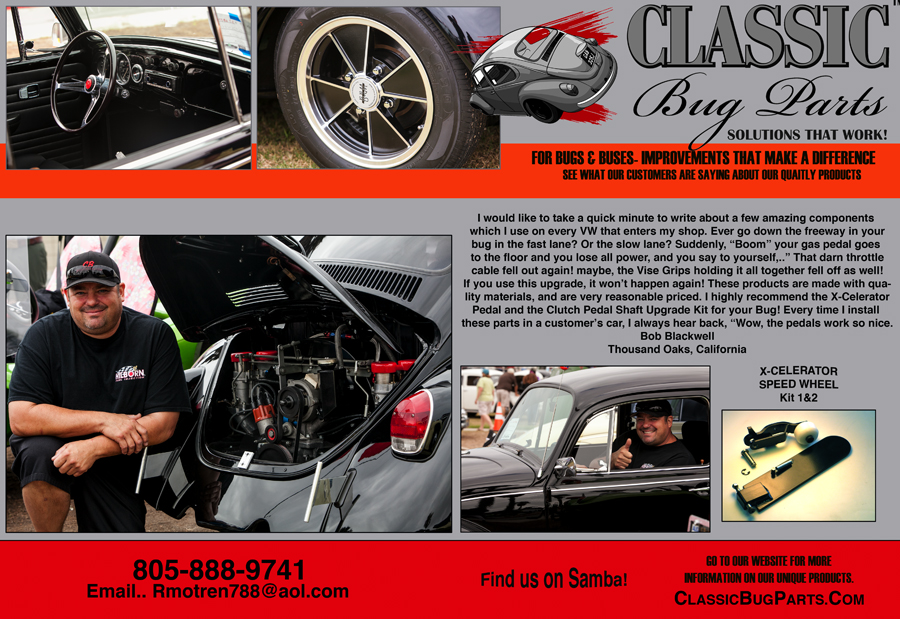 I would like to take a quick minute to write about a few amazing components which I use on every VW that enters my shop.  Ever go down the freeway in your bug in the fast lane?  Or the slow lane?  Suddenly, “Boom” your gas pedal goes to the floor and you lose all power, and you say to yourself… “That darn throttle cable fell out again!  Maybe the vise grips holding it all together fell off as well!

If you use this upgrade, it won’t happen again.  These products are made with quality materials, and are very reasonably priced.  I highly recommend the X-Celerator Pedal and the Clutch Pedal Shaft Upgrade Kit for your Bug!  Every time I install these parts in a customer’s car, I always hear back, “Wow, the pedals work so nice.” 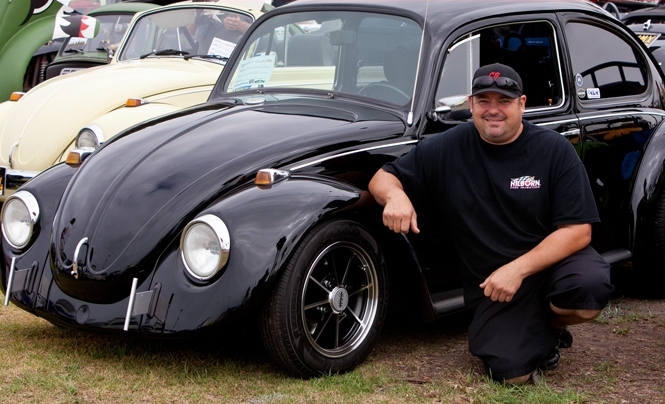 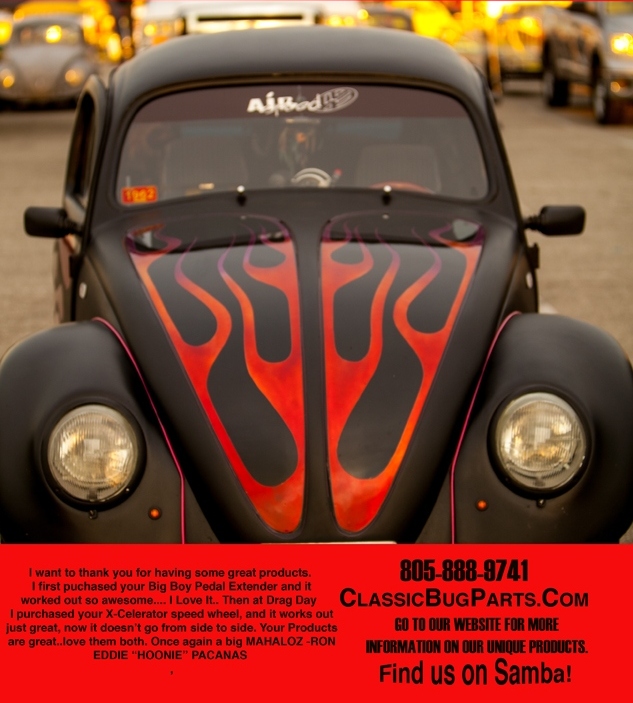 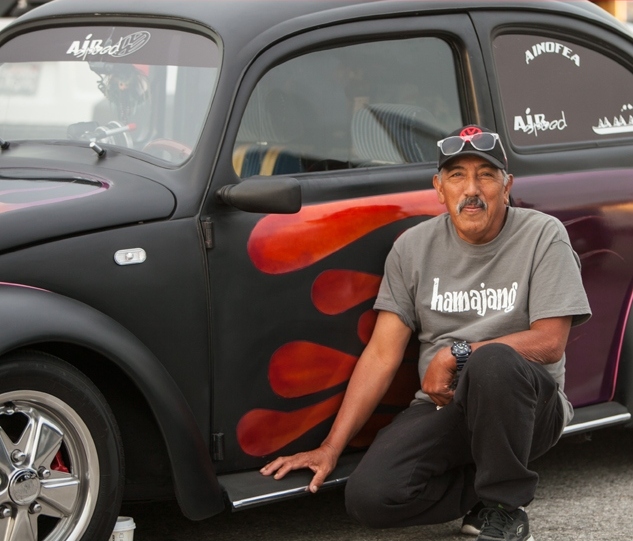 I LOVE CLASSIC BUG PARTS PRODUCTS!  They are some of the best that I’ve put on my buggy.  The action of the Big Boy Pedal Extender, along with the X-Celerator Speed Wheel Kit, is MUCH smoother than the stock assembly, and both are very easy to install.

One of the nicest parts of the unique clutch shaft (on the Big Boy Pedal Extender) is that the cable is fastened with stud and bushing.  This makes for a noticeably smoother clutch action.

The service is always great whenever I call. 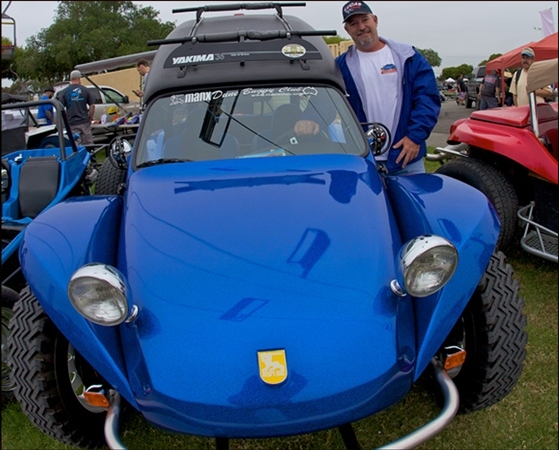 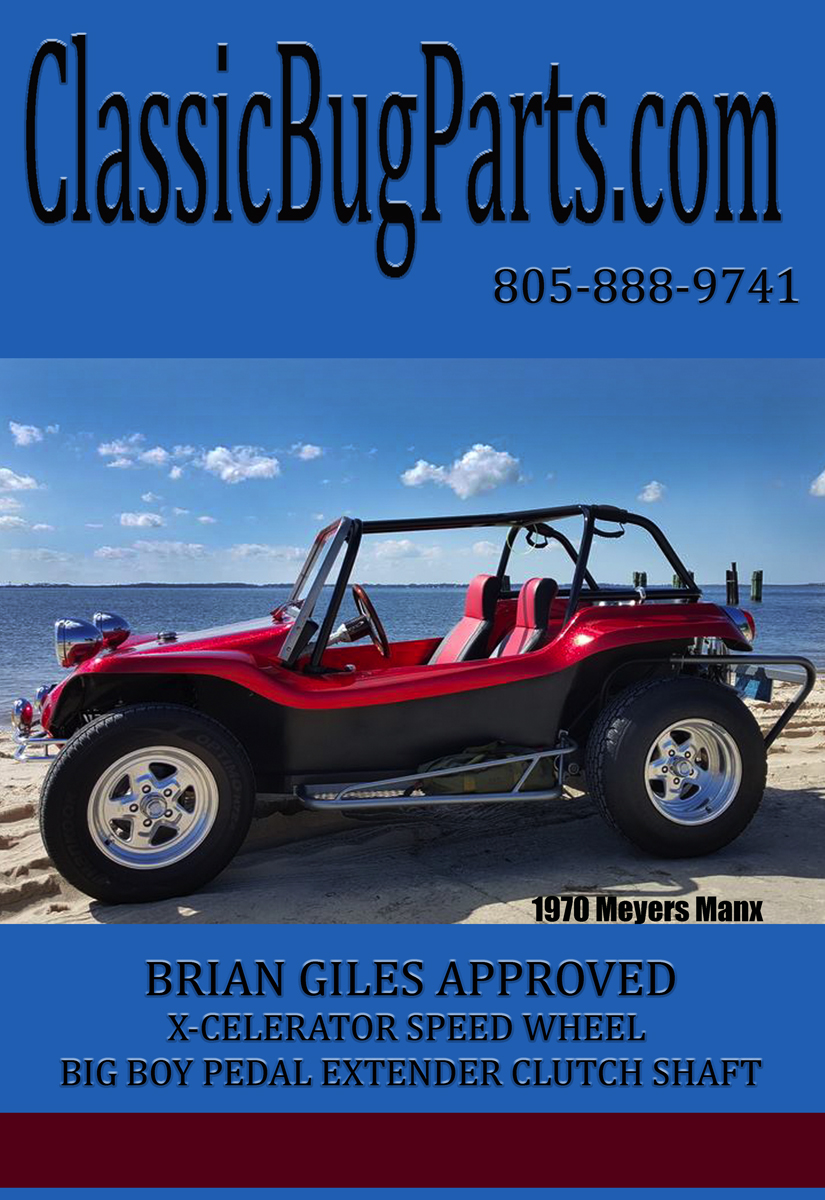 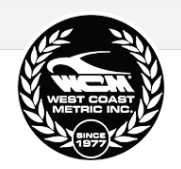 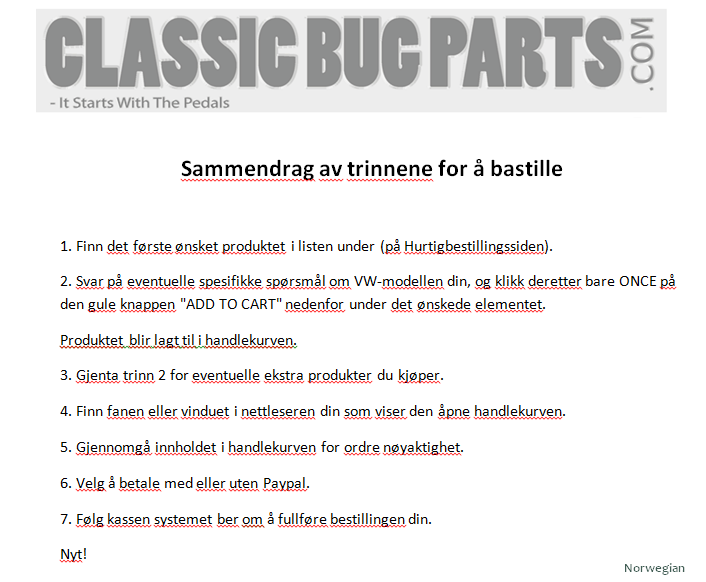 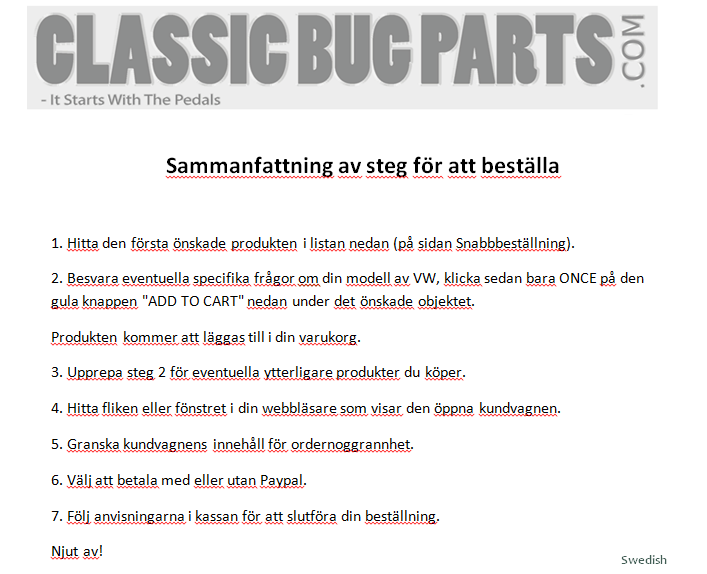 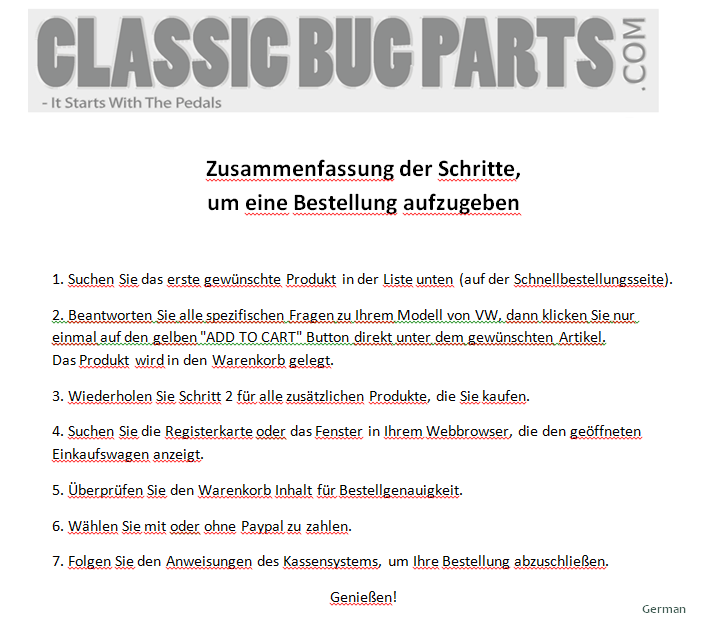 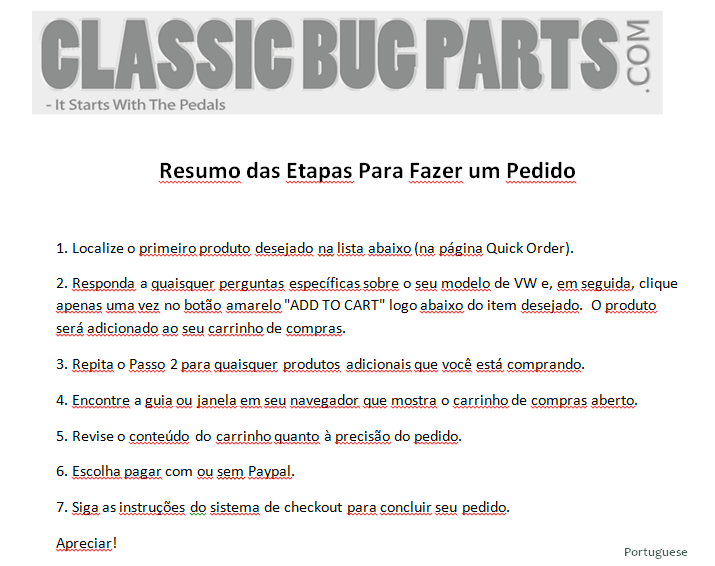 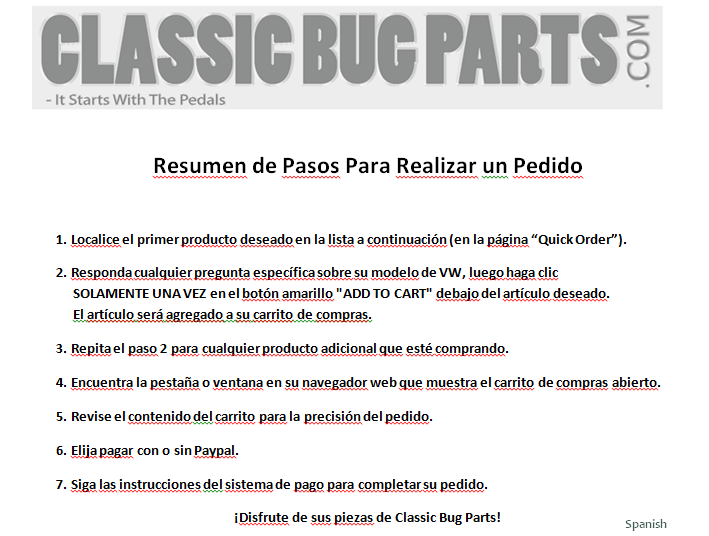 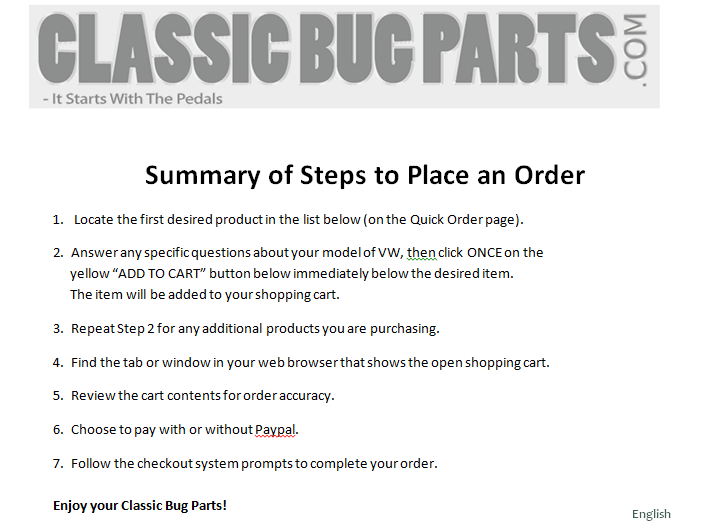